I have never lived alone, and that’s actually making me feel a little bit ……less than?  I have often been home alone, though, from a time when I was too young to be until now.  I really enjoy the feeling of having no demands on me for a time, although I do have the demands of the pesky job and pesky critters.  But in between, lots of unobligated time.  When these times first occurred they made me antsy.  I had moved from living with my mother to living with my ex.  I had gotten pregnant and had two children and it was years before I spent a night without them, but it eventually happened.  At those time, all those many years ago, drinking sometimes occurred to me in a way it didn’t at any other time.  I think sanity had returned to me at least in knowing that if I drank with the children dependent on me I was risking their lives and their health.  I knew that they would find me passed out and incapacitated.  But with them gone……   I’d think about it, very briefly, and happily I never went beyond that and tried it.

And all these years later, the thing that is going to give structure to my weekend home alone is my AA meeting.  The week days will taken care of by the aforementioned job.  And, when I’m not there, the critters (three cats, one dog).  And Sims.

Now we come to another kind of problem:  the intellectually self-sufficient man or woman.  To these, many A.A.’s can say, “Yes, we were like you–far too smart for our own good.  We loved to have people call us precocious.  We used our education to blow ourselves up into prideful balloons, though we were careful to hide this from others.  Secretly, we felt we could float above the rest of the folks on our brainpower alone.  Scientific progress told us there was nothing man couldn’t do.  Knowledge was all-powerful.  Intellect could conquer nature.  Since we were brighter than most folks (so we thought), the spoils of victory would be ours for the thinking.  The god of intellect displaced the God of our fathers.  But again John Barleycorn had other ideas.  We who had won so handsomely in a walk turned into all-time losers.  We saw that we had to reconsider or die.  We found many in A.A. who once thought as we did.  They helped us get down to our right size.  By their example they showed us that humility and intellect could be compatible, provided we placed humility first.  When we began to do that, we received the gift of faith, and faith which works.  This faith is for you, too.”

This section gives me goosebumps.  “Reconsider, or die.”  It sounds melodramatic until I put names to the concept.  Today I’ll add Kelly.  We talked to her mother last night.

I think I came a generation after the “God of my fathers” had already been displaced.  My parents were and are decidedly not religious and of unknown but not obvious spirituality.  My grandparents likewise were not religious or obviously spiritual, though my grandmother was very superstitious.  My Catholic great grandmother warned all and sundry who attended my father’s wedding in a Lutheran church that God would strike them dead.  They attended anyway, apparently unfazed, and many have died but some still live 55 years later.  Such was my upbringing and, as far as it goes, being smart was viewed as a good thing in family, and it still is.    The idea I try to impress on the young people in my turn is that smarts is a gift, something unearned and that, as the passage says, humility has to come first if a smart one is to lead a happy life.

“The spoils of victory” weren’t mine for the thinking.  I could not think my way out of my alcoholic drinking.  I tried, to some extent.  I read about alcoholism, things like that, but I did so while and drinking and the happy result for me is that I concluded I needed help.  The psychological help offered by my school and by the therapists my mother sent me to never seemed like any kind of solution at all.  The people in AA said they understood, and I believed them.  They said they were sober and happy, and I believed them.  In terrible desperation, the times when I fought to stop drinking, there was something in my that cried out to “God” but the people and the program were, to me, a much more understandable, provable, tangible higher power.  And it took some time of just refraining from drinking for me to move beyond that.  I was such a case that I couldn’t stop, and I couldn’t think very much or very well while under the influence.

So, they showed me that humility and intellect could be compatible?  Yes.  Some have showed me this by example.  Certainly it is true for me that when I placed humility first, by admitting that the people of AA had a solution to my problem that I did not have, I was able to receive the gift of a faith that works.

But personally I find, sometimes, and anti-intellectual prejudice in AA (and elsewhere in the country, in the world) and I try to speak out about it every time I see it.  Yes, as this passage illuminates, you can be “too smart” for AA, if you can’t summon up enough humility to follow suggestions, stop drinking and work the program.  Reconsider or die.  But I think you can be too stupid for AA as well.  And by that I don’t mean having a low IQ.  It’s true for me that I need to still put some intellectual effort behind my participation in AA or I’ll get numb and bored and, for me, I think that could be dangerous and possibly result in my drinking eventually.  “A simple program for complicated people . . . ”  Well, it’s really not all that simple.  Which to me is a good thing.  I’m a complicated person (and I don’t mean that in a good way) and I need complications to engage me.  Or at least I enjoy having complications that engage me.  It’s worked for me so far.

I went to Alaska.  I came home again.  I am afraid to fly, afraid to leave my pets, and I don’t like to travel.  I don’t like to shop, and I don’t like to spend money, two of the primary activities on a vacation like this.  I don’t like to leave my work for that long.  I don’t like to be out of touch, and in Alaska, on the water, there is no internet and frequently no phone.   This was a long distance, and a long time.  Seven members of my family went also, including four members of the oldest generation now, and it was hard to say goodbye to them at the end.  One member of my family got into big, serious trouble with alcohol.  I could make a joke, and point out that it happens often, but the fact is that many of my family members died young, alcoholic deaths.  So that was worrying.  When that wasn’t worrying, there was alcohol at every dinner, and sometimes at other times, and thankfully in my normal life I do not get that close to it every day.  There were no “real” meetings (more about that later, maybe), sparse program reading and not much program contact. 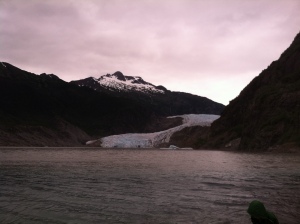 There were some of the most incredible sights I will ever see, sights that most people in the world never get to see.

I feel a huge sense of guilt listing all the ways this trip was difficult for me.  I didn’t hold my family back, and I hope I was mostly pleasant and someone they were glad to have along.  I am happy with myself that I went and I made it, and unhappy with myself because of the degree of distress I let it cause me.

I was at a meeting two nights ago where they read from the Daily Reflections book and it said something about not being willing to suffer from the effects of my character defects anymore.  I’m not willing to.

Right now, today, I don’t know what to do about that.